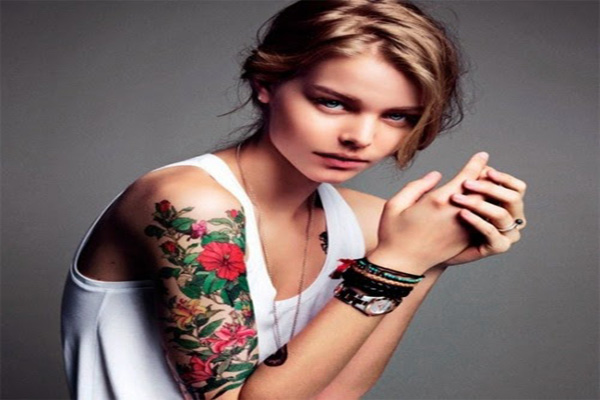 Tattoos date back to 6000 BC and have experienced their fair share of stigmatization.  It is really only very recently that tattoos and other forms of body modification have become acceptable by society. They were once heavily associated with criminals, sailors, circus people and unruly members of the public. As time passed however the public became very interested in the art of tattoos and discovered that they could in fact be a beautiful way to express oneself. Tattoos however are more than that now, with a better understanding of the industry artists are now able to improve lives cosmetically.
Tattoos can be used as a means of permanent makeup where pigment is used to depict the likes of eyeliner, lip liner and eyebrows. The process is popular amongst those who want to enhance their look or be gone with the hassle of applying makeup on a daily basis. It can however be more life changing than that. Artificial eyebrows are one of the more popular procedures carried out and quite often because the individual has hair loss due to old age, alopecia, chemotherapy and other reasons. It can be quite difficult to come to terms with eyebrow hair loss as it can dramatically change a person’s appearance leaving them feeling low with little self-esteem. Tattooing offers individuals such as these a chance to have eyebrows at they can be artistically recreated to look like the real thing.
Tattooing can also be used to help disguise unwanted scars or blotches on the skin. Using a pigment that matches your own the artist is able to disguise the area so that it blends in with the rest of your natural skin tone. This is great for those who have been left with scars that they are extremely unhappy with giving them more confidence.
The most recent form of cosmetic tattooing that has come to light is breast reconstruction after mastectomy surgery. 8 out of 10 women are diagnosed with breast cancer at some point in their lives and if caught early enough it can be prevented from spreading to other parts of the body.  For those who are lucky enough to survive the disease they can lose one or both of their breasts as a result of the treatment. This can leave women feeling like they have lost their femininity and leave them with quite large scars across the chest area.
Lots of women choose to have their breast/s reconstructed afterwards but they are still left without an areola and nipple. Fortunately tattoo artist are able to tattoo these features onto the reconstructed breast/s to give them a natural and realistic appearance.
On the other hand some women choose to cover their scars with vivid tattoo designs that can cover the entire breast or chest area. Some women don’t bother with breast reconstruction and instead just have the area covered in a large tattoo. For many of the women their tattoos are a symbol of their survival and they wear them with pride. Tattoos have provided an opportunity for people to improve their lives for themselves is a way that makes them feel more confident in their own skin.
Tattoos – Changing Lives Cosmetically: